The Get Down Brothers

Ronald "Ra-Ra" Kipling is a character in The Get Down and is played by Skylan Brooks.

The oracle, the guru, the all seeing eye.

RaRa Kipling, or Ronald Kipling, is the middle son of the loving and warm Kipling family. The voice of reason, RaRa thinks before he speaks and is the sibling with ‘his head screwed on straight.’ He’s a loyal friend and protective brother who’s wise beyond his years.

RaRa is the closest to the main protagonist Zeke and is the shyest of all the Get Down Brothers. He enjoys more nerd culture such as Star Wars which makes him worried he isn't as cool as the rest of the gang but Zeke assure him that he is.

Formation of the Get Down Brothers Edit

Ra-Ra's confiding in the main protagonist Zeke after he has come back from a club; when the so called Shaolin Fantastic, a guy he doesn't know, tells them to follow him to the fliest secret underground party in all of New York. There he is blown away by this new style of hip-hop created by Grandmaster Flash known as "The Get Down." Grandmaster Flash's wordsmith hands mic to Zeke because he is the 'chosen one' and he kills it. Rapping about his 'get down crew' he introduces Ra-Ra, Dizzee, Shaolin, and Boo. With that the wheels are set in motion and The Get Down Brothers are born. 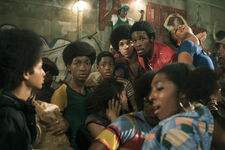 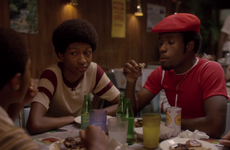 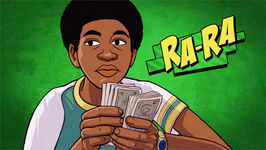 Add a photo to this gallery
Retrieved from "https://the-get-down.fandom.com/wiki/Ronald_%22Ra-Ra%22_Kipling?oldid=5014"
Community content is available under CC-BY-SA unless otherwise noted.